What’s the hype with Celery Juice?

What’s the hype with Celery Juice?

The other day I was reading an article about how celery juice was the new buzz word for health and wellbeing.  Even some celebrities were harping on about how beneficial it is to drink celery juice every morning so I thought for this months blog post, I will share some of the benefits this health drink can provide.

Celery is a member of the carrot family and the plant and it seeds provide a good source of vitamins, minerals and antioxidants.  It contains a high levels of vitamin K and amounts of vitamin A, B2 and B6 and vitamin C and a good source of folate, potassium, manganese, pantothenic  acid and fibre. It is also low in calories and sugar making it a good choice for a quick snack. I personally haven’t tried celery juice on it’s own, but I’m a big fan of making your own juices instead of drinking shop brought as the nutrients are still alive and it’s not pasteurised which kills off all the active nutrients. 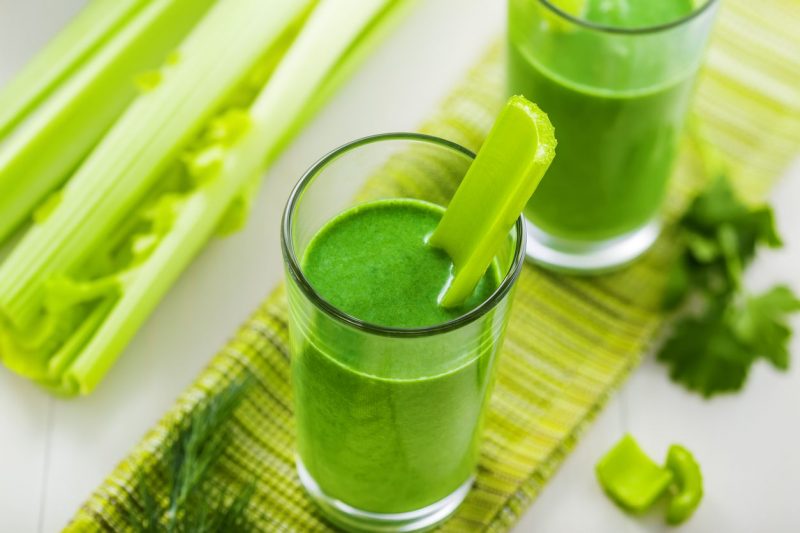 Here is a personal account of a blogger called the Middle Edit’s experience about drinking celery juice.

Celery juice is having a moment and I am officially here for it.

A couple of weeks ago, I shared my green smoothie recipe. The smoothie is chock-full of veggies including celery. Because I drink the smoothie on a pretty regular basis, I didn’t look into this whole celery juice thing. I figured putting a couple stalks in my smoothie would be enough. Plus I would be getting benefits from the other vegetables I put in the smoothie.

However, the celery juice kept popping up everywhere. I eventually caved and decided to look more into it.

In my never ending search for an explanation/cure for my hormonal acne and occasional eczema flare-ups, I’ve come to learn just how important our digestion and gut health really are. So when I read, per Williams, that “celery juice is one of the most powerful and healing juices we can drink. Just 16oz of fresh celery juice every morning on an empty stomach can transform your health and digestion in as little as one week.”. I knew I had to give this stuff a shot.

From what I’ve read, celery juice helps to purify the blood stream, clear up skin problems, aid in digestion, and reduce blood pressure. It is also rich in Vitamin A, Iron, Magnesium, Celery juice is a well known diuretic with the ability to flush toxins out of the body. Sounds like some pretty powerful stuff, right? I was pretty much sold after reading up on it. Per the instructions from Medical Medium, I drank 16 oz of fresh, organic celery juice first thing in the morning, on an empty stomach. Here’s what happened…

It really did help with digestion

I’ve always experienced stomach cramps after eating and I tend to get very tired after meals. I am also well aware (thanks to WomanCode) that my digestion is far from good. As I mentioned above, celery is rich in organic sodium which helps to increase the stomach acid, which in turn primes you for easy digestion. When your stomach is low on acid the body has to work harder to digest the food we eat, and the harder it works the more often we experience feeling tired after a meal. This was something I really noticed towards the end of this week. I wasn’t experiencing that painfully full, extremely tired feeling that I normally experience after meals.

I also noticed a significant difference in bloat

Another benefit of good digestion! I always pay close attention to bloat because it can be a good indicator of how your body is reacting to something you ate. So when I noticed a significant difference this week, I knew something was right. Immediately after drinking the celery juice I would appear a little bloated (which is totally normal). However throughout the day I would notice a significant difference from pre celery juice days. A flatter stomach as a benefit of drinking celery juice, yes please!

My cravings were reduced

This was something I noticed right away. I typically always need a snack by 9:30-10am, but this week, I never once felt hungry, never had the urge to snack and I found myself eating less at meals, but still feeling completely satisfied.

I had more energy

Food is fuel, right? So when it’s broken down properly and our bodies don’t have to put in overtime to digest it. In turn we ultimately have more energy. You know those days where you really just don’t have the energy? I didn’t feel that once this week. I felt good, on top of it. It wasn’t the type of energy you’ll ultimately crash from either. It was a good, long, sustained energy that lasted throughout the day.

A week is a pretty short time to come to any conclusions about something. In my opinion though, celery juice is a game changer. I’m not yet sure on how it is affecting my skin though. I think I need more time for that. But I’ll definitely continue to drink this on a daily basis and reap the benefits of “the most powerful and healing juices”.

What do you think, will you give celery juice a try?